40% off with Waves Specials with code Create40 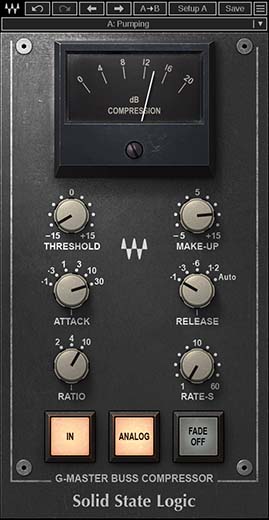 Prized by top engineers for its ability to “glue together” tracks, the SL 4000 G master buss center compressor is ideal for taming piano dynamics or adding punch to drums and percussion. Now, the ultimate finalizer that transforms a mix into a finished record can be yours – in the box.

*Included in the following bundle

These plugins sound so close to the original consoles, even experts who work with SSL boards day in and day out can’t tell the difference. With the EQ and dynamics of the vintage SSL mixers at your fingertips, you can now give your mixes the SSL sound of the big studios.

Founded in the U.K. in 1969, Solid State Logic currently has over 3,000 SSL consoles in active use around the world. SSL’s reputation for hit-making sound is unsurpassed, having been used on hit recordings by Beyoncé, Bruce Springsteen, Taylor Swift, Madonna, the Rolling Stones, Sia and hundreds of others. Of all these consoles, the SSL 4000 may be the most famous. With the Waves SSL 4000 Collection, the classic SSL 4000 sound can now be yours.

The SSL E-Channel delivers the incomparable sound of the Solid State Logic 4000-series console’s all-discrete design and its Class A, VCA chip. It’s a slice of the world’s greatest hitmaking machine, in your computer.

The equalization section of the SSL E-Channel is based on the renowned Black Knob equalizer, developed in 1983 with legendary producer George Martin. It features a High Pass Filter, Low Pass Filter, and a four-band parametric equalizer.

The dynamics section features a soft-knee compressor / limiter and an expander/gate modeled on the SSL LS611E. Like the original, it can be placed before or after the equalization section, and makeup gain is automatically applied to maintain a steady output level.

The power of the complete Solid State Logic SL 4000 console series is now at your fingertips with the SSL G-Channel, a plugin that consolidates the equalization and dynamic controls of the SSL G-Series consoles into one convenient tool.

The Dynamics section features soft-knee compression and limiting, a gate/expander, and automatic makeup gain for rock steady output levels. Together, they deliver the one-of-a-kind sound and convenient routing flexibility that have made the SSL G-Series console a control room classic.

This four-band equalizer, modeled on the SSL G Series EQ292, offers greater gain change than the E-Series EQ, and a slightly different curve. The SSL G-Equalizer includes a pre-boost dip and a pre-cut rise, as well as a broader Q for more extreme equalization. That’s why many leading engineers use the E-Channel’s equalization for detailed problem-solving and mixing, and the G-Equalizer to shape and give character to the sound.

More Analog Modeled Plugins available at Waves from $29.99 in the Super Deals Weekend.