A while back I was reading one of my favourite books on recording, ‘The Recording Engineers Handbook’ by Bobby Owsinski when I came across a trick I promised myself I would try.

The trick itself itself was to tune an acoustic to the key of the song your recording, place said acoustic next to amp then place a mic near the body facing the soundhole.

This trick was designed for a clean guitar sound and is supposed to have the effect of creating a tuned reverb chamber.

So today a friend and I decided to give the trick a go.

We used my Mexican Fender Telecaster and set up my Fender Champion 600 as below. First recording we did was micing the strings and body. We used a Takstar PCM 6100 – cheapo condenser mic that is worth much more than the £4 I paid for it on fleabay. 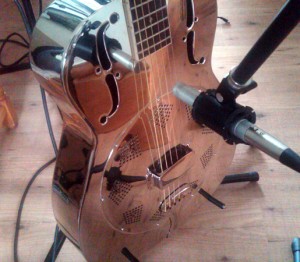 The second recording we did was by placing the mic over the F hole as pictured below. Each time we recorded we split the recording onto two tracks.

In each case Track 1 we have the ‘tuned reverb’ and Track 2 we have our main track.

To boost(exaggerate) the reverb I then placed a compressor on the the ‘reverb’ track. So first recording: Mic on the strings ->

The resonator is a Harley Benton HBN100 that I was bought. It came from Thomann and for £200 it’s well worth it.

Apart from the compression applied to the first track there has been no other processing applied.

Best to listen with headphones or dedicated speakers.